Hi, I was speaking to a Protestant friend of mine and he was telling me that the Brown scapular goes against the Bible. Could you please give me an answer to give him? God bless.

This is a very good question that can be applied to pretty much all sacramentals and not just the Brown Scapular.

For those who don’t know what a sacramental is, or what the Brown Scapular is, let’s take a moment for a few definitions.

First off, what is a sacramental? This is how the catechism describes them,

Sacramentals are sacred signs instituted by the Church. They prepare men to receive the fruit of the sacraments and sanctify different circumstances of life.
CCC 1677

Sacramentals include crucifixes, rosaries, medals, holy water, holy oil, blessed salt and many others. These items are usually blessed by a priest and are used in the prayer life of the faithful.

Were do sacramentals get their power and blessings? This question was addressed directly by Sacrosanctum Concilium at the Second Vatican Council:

Thus, for well-disposed members of the faithful, the liturgy of the sacraments and sacramentals sanctifies almost every event in their lives; they are given access to the stream of divine grace which flows from the paschal mystery of the passion, death, the resurrection of Christ, the font from which all sacraments and sacramentals draw their power. There is hardly any proper use of material things which cannot thus be directed toward the sanctification of men and the praise of God. 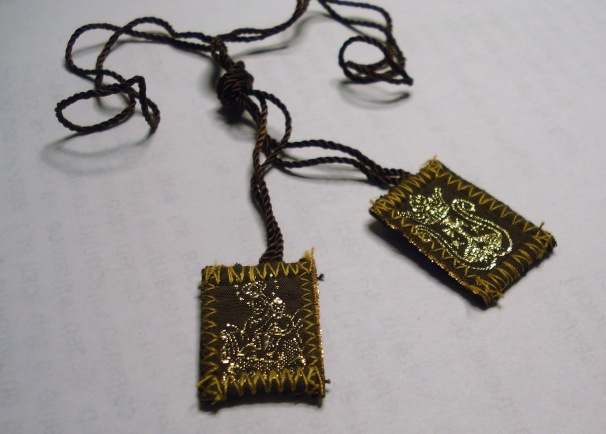 A Brown Scapular is a type of sacramental, it is usually made of two pieces of brown fabric roughly the size of a postage stamp and is worn around the neck with one side on the back and the other on front. It is believed to have been given to an English Carmelite in the 13th century by the Blessed Mother.

The small scapular worn by the laity is meant to replicate the larger one that is worn by Carmelite priests and brothers. It’s a way to participate in the charism of the Carmelites in a small, Therese of Lisieux kind of way.

Some Protestant objections to sacramentals are that they are “superstitious” or “unbiblical,” but both claims can be proven false.

Superstition
The Church rightly condemns superstition and says it’s a violation of the First Commandment. The catechism goes on to define and explain superstition as such:

Superstition is the deviation of religious feeling and of the practices this feeling imposes. It can even affect the worship we offer the true God, e.g., when one attributes an importance in some way magical to certain practices otherwise lawful or necessary. To attribute the efficacy of prayers or of sacramental signs to their mere external performance, apart from the interior dispositions that they demand, is to fall into superstition.

Anything, even lawful and righteous practices, are subject to falling into superstition, if we attribute their efficacy to the item or act rather than to God Himself.

I once heard a person say that they carried a small bible in thier back pocket, a very laudable and good thing to do, but it wasn’t for evangelizing or prayerful reading, it was because this person belived it would miraculously prevent any harm from coming to them. This is exactly what paragraph 2111 was speaking of. If a crucifix or a Bible carried on your person could protect you from all harm, regardless of the will of God, then there wouldn’t be a single priest martyred in all the world.

If a person wore a Brown Scapular, but didn’t have the inward disposition required to receive the blessings obtained by it, then it would be to no effect. And to continue wearing it, knowing that they were living outside of God’s will and grace, just to obtain some kind of protection, that also would be superstitious.

But using a sacramental, and knowing that and blessings obtained by it come from God and not the sacramental itself, that is not only good and pious, it’s is also deeply grounded in Scriptures.

There are several verses one could cite for the use of sacramentals, some of the most powerful ones are from the Gospels. In three separate instances Jesus uses His saliva, and in one of them He also combined His spit with dirt to create mud (John 8).

Why did Jesus use saliva and dirt to heal the man born blind? That’s a deeper issue that theologians have discussed for centuries, but for our purposes it’s enough to point out that Jesus used physical objects to effect supernatural changes. He used spit and dirt to create healing mud (a sacramental) that then conveyed His graces and healing powers to the man born blind, and combined with that man’s faith he was healed.

Another instance of God using the physical objects around us for supernatural purposes can be found in the Acts of The Apostles,

And God did extraordinary miracles by the hands of Paul, so that handkerchiefs or aprons were carried away from his body to the sick, and diseases left them and the evil spirits came out of them.

Even in many evangelical and Pentecostal churches today they bless handkerchiefs and send them out to their sick members to pray for healing.

The use of Holy oils, such as the church uses in baptism, confirmation, ordination, and anointing of the sick, is mentioned in the Letter of Saint James,

Is any among you sick? Let him call for the elders of the Church, and let them pray over him, anointing him with oil in the name of the Lord

This too is a common practice in Protestant churches.

There are many other instances of sacramentals in both the Old and New Testaments, but these few should suffice to show that the use of such is not a superstitious activity and is biblically based.

In the end, the Brown Scapular is a private devotion based on private revelation. Neither of which are any Catholics obliged to practice or believe. We are bound only to believe public revelation as contained in the Holy Scriptures and Sacred Tradition, as exercised by the Church’s magisterium. (Not to say I don’t think the Brown Scapular is a good or devout practice, just pointing out that it is a private devotion)

Some private devotions, such as the Brown Scapular or the Rosary, may appeal to you or they may not. You can be a Catholic in good standing and never say a single rosary, you’d be missing out on a wonderful pray and devotion, but it is not obligatory. I myself am very drawn to the Chaplet of Divine Mercy, I just love it, but others may not, and that’s ok.

The Church actually warns about over-emphasis on private devotions if they distract or diminish the one public devotion that we are obliged to participate in, The Holy Mass.

Popular devotions of the Christian people are to be highly commended, provided they accord with the laws and norms of the Church, above all when they are ordered by the Apostolic See…

But these devotions should be so drawn up that they harmonize with the liturgical seasons, accord with the sacred liturgy, are in some fashion derived from it, and lead the people to it, since, in fact, the liturgy by its very nature far surpasses any of them.

Thank you John, I hope this answered your question and helps you to spread and defend the faith in your daily life. God bless you.

4 comments on “Question; The Brown Scapular (Objections to Sacramentals)”

Leave a Reply to The Smiling Pilgrim Cancel reply