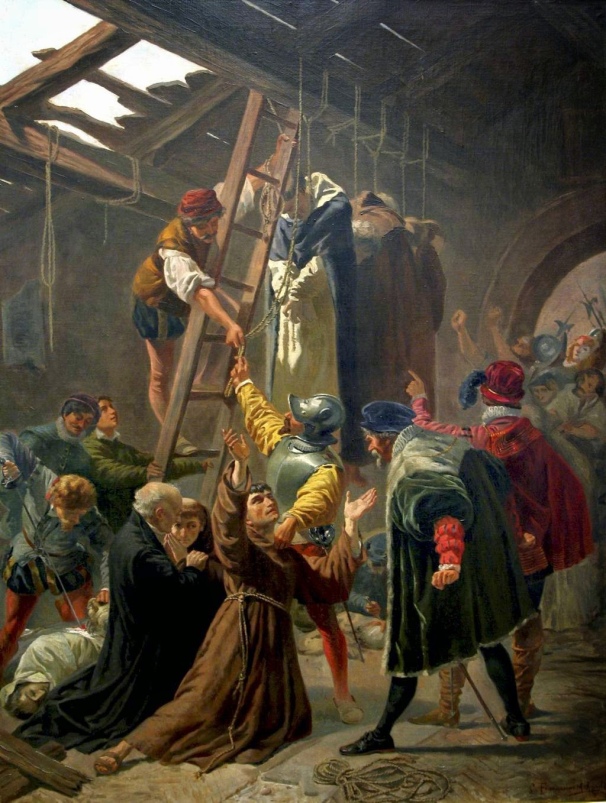 Father Andrew Wouters wasn’t the most faithful of priests, and everyone knew it. He was known to drink too much, had several affairs with women in town, and he fathered at least a few children despite his vow of celibacy.

He was suspended from his priestly duties and living in Gorkum during the Wars of Religion in the Netherlands, when Calvinist forces raided the town and captured 18 priests and religious brothers from several Catholic orders. Some sources say he was captured by these raiders, but some say he voluntarily joined his fellow priests that were going to be tortured and most likely killed.

Maybe he saw martyrdom as his final shot at redeeming his legacy, maybe he felt regret for the wasting of his vocation, or maybe he had some other motivation, we may never know but what we do know is that God gave Father Andrew the graces he needed to endure the agony that lay ahead of him.

Part of the torture he received during his weeks of captivity were daily beatings while being constantly reminded of his personal failings as a priest and mocking him for his public disgrace. But despite the torture, both physically, emotionally, and mentally, he never gave in and renounced his faith.

Towards the end of their captivity, the commander of the raiders received a letter from the Prince of Orange, William the Silent, a Protestant ruler that demanded the priests be released unharmed. Ignoring this he ordered his men to kill the prisoners if they refused this one last chance to renounce major tenets of Catholicism.

On July 9th, 1572, as the noose was slipped over his head, Father Andrew was given one last chance to renounce the Pope and the Real Presence, but he refused. His final words were “Fornicator I always was; heretic I never was.”

Father Andrew Wouters was hanged in the barn outside town with the other 18 prisoners, all of them priests or religious brothers. The 19 Martyrs of Gorkum were canonized in 1865, on the Feast of Saints Peter and Paul, by Pope Pius IX.

Father Andrew Wouters, pray for us, especially when the evil one reminds us of our past failings, help us to remember that Christ has already conquered sin and death, and that we only need to remain in Him to be Victors.