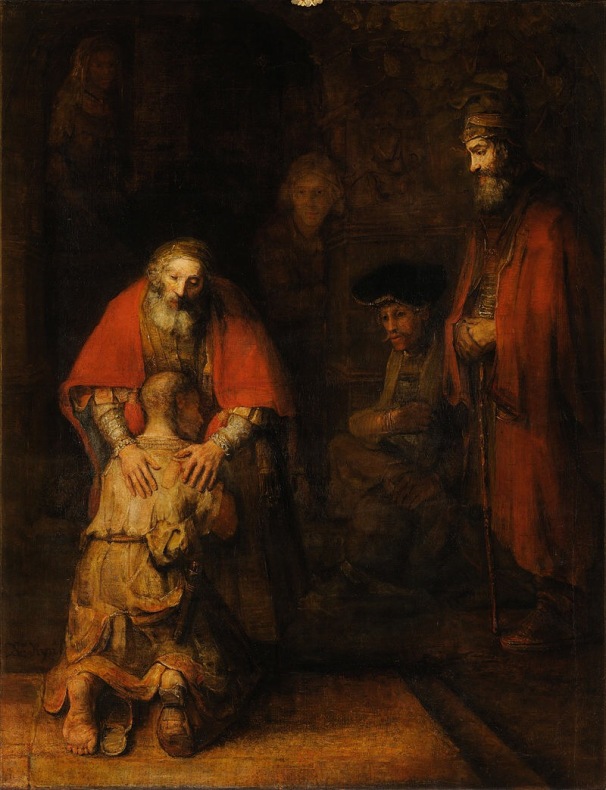 We are the prodigal son(s)

We’ve all heard the story of the prodigal son, even non-believers are somewhat familiar with it. I’ve heard it preached on, lectured about, I’ve read articles and blog posts about it, I’ve studied it on my own, but I’ve always come at it from point of view of the prodigal son himself.

Whenever I’ve read, heard, or studied this story it is always cast as God being the merciful father and us (the church, and individual sinners) as the prodigal son. This is the way I’ve always seen this story, at least until recently.

This isn’t to say that the common interpretation of this story is wrong, not by a long shot. We are all sinners unworthy of forgiveness, and yet here is our Heavenly Father being merciful even beyond human comprehension. So merciful that He sent His Son to become one of us and give Himself as a loving sacrifice for us.

So seeing ourselves in the part played by the prodigal son is spot on, we have all ran away from God to seek to do things our own way, in one way or another, with some running farther than others, but no matter what we do God is still waiting for us with open arms.

But recently I had one of those lightbulb moments, and I realized that his brother is more important in the story than we usually realize.

Let’s take a look at the full passage from the Gospel of St Luke:

And he said, ” There was a man who had two sons; and the younger of them said to his father, ‘Father, give me the share of property that falls to me.’ And he divided his living between them. Not many days later, the younger son gathered all he had and took his journey into a far country, and there he squandered his property in loose living. And when he had spent everything, a great famine arose in that country, and he began to be in want. So he went and joined himself to one of the citizens of that country, who sent him into his fields to feed swine. And he would gladly have fed onthe pods that the swine ate; and no one gave him anything. But when he came to himself he said, ‘How many of my father’s hired servants have bread enough and to spare, but I perish here with hunger! I will arise and go to my father, and I will say to him, “Father, I have sinned against heaven and before you; I am no longer worthy to be called your son; treat me as one of your hired servants.” ‘And he arose and came to his father. But while he was yet at a distance, his father saw him and had compassion, and ran and embraced him and kissed him. And the son said to him, ‘Father, I have sinned against heaven and before you; I am no longer worthy to be called your son.’ But the father said to his servants, ‘Bring quickly the best robe, and put it on him; and put a ring on his hand, and shoes on his feet;  and bring the fatted calf and kill it, and let us eat and make merry; for this my son was dead, and is alive again; he was lost, and is found.’ And they began to make merry. “Now his elder son was in the field; and as he came and drew near to the house, he heard music and dancing. And he called one of the servants and asked what this meant. And he said to him, ‘Your brother has come, and your father has killed the fatted calf, because he has received him safe and sound.’ But he was angry and refused to go in. His father came out and entreated him, but he answered his father, ‘Behold, these many years I have served you, and I never disobeyed your command; yet you never gave me a kid, that I might make merry with my friends. But when this son of yours came, who has devoured your living with harlots, you killed for him the fatted calf!’ And he said to him, ‘Son, you are always with me, and all that is mine is yours. It was fitting to make merry and be glad, for this your brother was dead, and is alive; he was lost, and is found.’ ”

The brother only really appears toward the end of the parable, and he appears to be a petulant child. There is no indication as to how old he is, or how old he was when his brother left. Considering that this is a parable, with fictional characters, I suppose his age doesn’t really matter, but he sounds as if he’s a sulky teenager.

What also isn’t mentioned is the moral character of this brother, it is assumed that he is of upstanding character but it never says so in the text. I always made that assumption myself, and kind of sympathized with him for being annoyed at his younger brother.

For all we know he could have been just as sinful and debauched as his younger sibling, just committing his sins closer to home. And here is where my lightbulb went off.

We are represented by both brothers

Just because one’s sins are known to all doesn’t mean he’s a bigger sinner than his older brother. His older brother could’ve been a serial killer and was burying bodies out in the field when the party started, it doesn’t say that he wasn’t (a joke, but a serious point).
How many times have you seen someone, who’s sins are well known, and thought “he (or she) has some nerve to be an usher in church” or “didn’t he have a DUI a few months ago, and now he is singing in the choir?”

If all of our sins were laid bare would we be any different? But because our sins are secret, we feel as if we are somehow more righteous, or even just less sinful, than our fellow Christian.

Even though our friends and fellow parishioners don’t know our sins, God certainly does, “would not God discover this? For he knows the secrets of the heart.” (Psalms 44:21)

Me as both sons

I can’t speak for anyone else, but I now see myself in both brothers. Even though I’ve considered myself a Christian for my entire life I was always somewhat distant from God. My personal idea of God was less Christian and more of a Diest view.

I saw God as some far off deity, too busy with Himself than to pay much attention to us here on earth. I seen Him as the Creator that set everything in motion and then sat back and just watched, but I couldn’t have been more wrong.

Even though my understanding of God was far from Christian orthodoxy, I didn’t feel like I was a bad Christian, it’s only in hindsight that I realize how wrong my perceptions were. I had never committed rape, murder or robbed a bank, and somehow in my mind that made me a pretty decent guy as if rape, murder and armed robbery were the standard and I was above it.

But I was (am) a sinner, and without the grace and forgiveness of God I’d be in the express lane to hell. It takes a lot of prayer and thought to realize that no matter how good we think we are, we are the prodigal son.

The danger of the other brother’s situation

In some ways the other brother, and thinking like him, is more of a danger to our souls than we think at first glance. Like I said before, just because he stayed home and close to his father doesn’t mean he was any less of a sinner. I have gone to church my entire life, I can count the Sunday’s that I missed, but even though I stayed close to God in that respect I couldn’t have been further away.

Where you are physically and where your heart is can be two radically different locations. My body may have been sitting in a pew, but my heart was far from worshiping God. By outward appearances I probably  looked like a good Christian, and even though I never explicitly denied the existence of God, I wasn’t remotely close to Him.

By seeing himself as righteous, and better than his brother, he was setting himself upon the road to perdition. Jesus said He would “spew out” a person that is lukewarm, and this is where the other brother finds himself;

The hardest person to evangelize is a lukewarm “Christian”, I put that in quotations because they are usually Christian in name only. I know, I was one for years.

It’s so hard because they feel like they are on the path toward the narrow gate, but if they objectively observed their lives and choices they’d see that this is a false confidence, the hard part is getting them to see it.

The turning point came for me when a friend pointed out that I actually had murdered someone;

“Any one who hates his brother is a murderer, and you know that no murderer has eternal life abiding in him.” (1 John 3:15)

I may have not denied the existence of God or worshiped pagan gods, but I had worshiped money and possessions, not in a literal sense but still in a very real way.

So in essence I hadn’t run away from God to a foreign land, but I had served foreign gods, and committed all manner of sins, so how can I judge the guy with the DUI in the choir. I can only thank God for the mercy He has shown to me, and pray that everyone will see that God is waiting for them too, no matter if they stayed close or went on a journey away from Him.

We all need His forgiveness and mercy, the only thing is do we realize it before it’s too late?

We see the father (who represents God) as being merciful and forgiving his wayward son, and we need to do our best to emulate him and not his two sons. We can be merciful like the Father, and less sinful like the prodigal son, and less judgmental like his brother.

In this year of mercy, let us not be afraid to say sin is wrong, but let’s also leave the judging of souls to God.