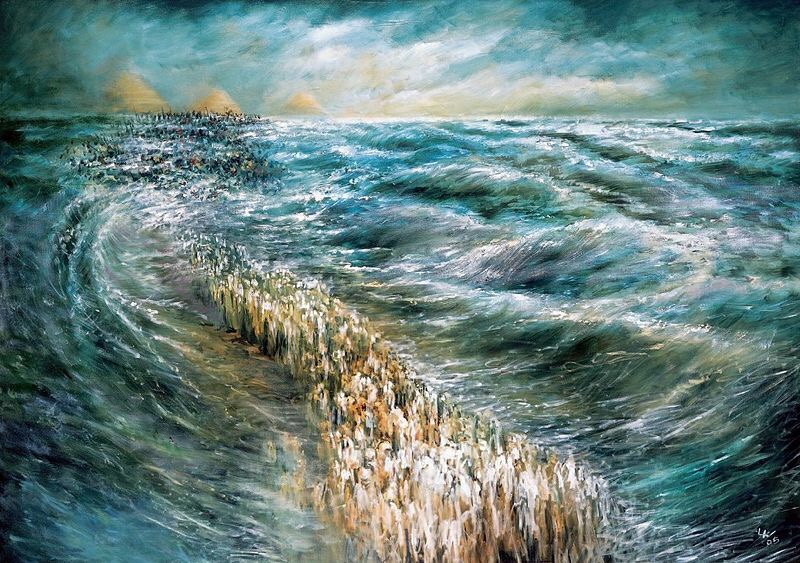 The story of Moses is a well known one, probably one of the most well known stories in the entire Old Testament. Ask anyone about Moses and they’ll know a general outline overview of his life, even non believers. I’d write a summary of the life of Moses, up until the part when the Israelites arrive at the Red Sea, but in his speech to the Sanhedrin, St Stephen made a great outline so that’s where we’ll start;

“But as the time of the promise drew near, which God had granted to Abraham, the people grew and multiplied in Egypt  till there arose over Egypt another king who had not known Joseph. He dealt craftily with our race and forced our fathers to expose their infants, that they might not be kept alive. At this time Moses was born, and was beautiful before God. And he was brought up for three months in his father’s house; and when he was exposed, Pharaoh’s daughter adopted him and brought him up as her own son. And Moses was instructed in all the wisdom of the Egyptians, and he was mighty in his words and deeds. “When he was forty years old, it came into his heart to visit his brethren, the sons of Israel. And seeing one of them being wronged, he defended the oppressed man and avenged him by striking the Egyptian. He supposed that his brethren understood that God was giving them deliverance by his hand, but they did not understand. And on the following day he appeared to them as they were quarreling and would have reconciled them, saying, ‘Men, you are brethren, why do you wrong each other?’ But the man who was wronging his neighbor thrust him aside, saying, ‘Who made you a ruler and a judge over us? Do you want to kill me as you killed the Egyptian yesterday?’At this retort Moses fled, and became an exile in the land of Mid’ian, where he became the father of two sons. “Now when forty years had passed, an angel appeared to him in the wilderness of Mount Sinai, in a flame of fire in a bush. When Moses saw it he wondered at the sight; and as he drew near to look, the voice of the Lord came, ‘I am the God of your fathers, the God of Abraham and of Isaac and of Jacob.’ And Moses trembled and did not dare to look. And the Lord said to him, ‘Take off the shoes from your feet, for the place where you are standing is holy ground. I have surely seen the ill-treatment of my people that are in Egypt and heard their groaning, and I have come down to deliver them. And now come, I will send you to Egypt.’ “This Moses whom they refused, saying, ‘Who made you a ruler and a judge?’ God sent as both ruler and deliverer by the hand of the angel that appeared to him in the bush.  He led them out, having performed wonders and signs in Egypt and at the Red Sea, and in the wilderness for forty years.

The allegorical sense of the Exodus

We know that scripture has several “senses” and that when reading it we should always try to see what’s beyond the face value, literal sense, and see the allegorical, analogical and moral senses as well. (See CCC 115-119 )

I’d like to focus on the allegorical sense of the story of Moses. St Augustine saw the entire story of Moses as an allegory or analogy of our struggle with sin, and our calling from Christ to come out of our sinfulness, to make our own personal exodus to the promised land of Christ. When we see the story of Moses through this lense it takes on an entirely new light.

“Allegorically, sinful man serves the devil, typified by the Pharaoh, and is forced to labor in the mud of earthly desires. But when Christ offers to lighten our burden, we are led through the sea of Baptism, where he destroys the sins that enslaved us.” -St Augustine

Now seeing this story as St Augustine did, we can see that it’s no longer just a story of political, civil, and religious tyranny, but now we can see ourselves right there with the Israelites as they, and we, struggle to free ourselves (with the grace of God) from our earthly desires.

The Red Sea and baptism

Now we can see that the crossing of the Red Sea is a cleansing of for the people of Israel before the enter into the presence of God at Mt Sinai, and later in the promise land. This cleansing will be replayed by them when they take ritual baths in mikvahs to cleanse before Yom Kippur, also anyone converting to Judaism is ritually bathed in a mikvah. To the Jews it was symbolic, but we believe that when we are baptized it is efficacious for the removal of original sin.

The Catechism makes this connection between the crossing of the Red Sea and baptism:

Also a practice of the early Church (that is sometimes continued today) was that the person to be baptized entered the waters from the east and came out on the west side. If you look at a map, the Red Sea was crossed from east to west, just as Christians would enter the waters of baptism over 1000 years later!

God delivered the Israelites from their bondage to Pharaoh through Moses, and later gave them the law. God delivers us from bondage to sin through Jesus, and He gives us His grace.

Just as later generations remembered the deliverance from slavery, we should remember that by the waters of baptism we have been set free. Everytime you enter a church, and bless yourself with the the sign of the cross and holy water, you are reminding yourself of your baptism and your baptismal promises (either made by you or by your parents on your behalf). Think of this as a reminder of your own exodus from sin and the consequences of sin, because as St. Paul tells us, “the wages of sin is death.”

The next time you bless yourself with holy water, think of Moses and the children of Israel crossing the Red Sea with Pharaoh’s army in pursuit. Think of how sin pursues us, but remember that just as God drowned Pharaoh’s army He can drown your sin that follows you.

Next time you enter a church, don’t just bless yourself out of habit. Do it with full knowledge of what you are doing, remind yourself of your baptismal promises, and make a commitment to live them out everyday. In doing so we will always remember our deliverance from sin, evil, and eternal death, just as the Israelites were 3000 years ago.

Celebrant: Do you reject Satan?

(All posts in this series can be found at this Page )

5 comments on “The Story of Salvation; Moses ”